If you thought Italy is not appropriate for Summer holidays, then we are here to show you another aspect of Italy, full of white-sand beaches and turquoise, crystal clear waters. Find below the top ten best beaches of Italy and start organizing your summer escape!

Some of the best beaches in mainland Italy are in Puglia – particularly in a string of pristine sandy strands south of the historic towns of Avetrana and Manduria, the latter famous for its Primitivo wine. For white sand, translucent water and informal beach-shack lunches, head for the seaside villages of Punta Prosciutto (“Ham Point”) or Torre Colimena. The scene is molto informale, with families from Lecce, Taranto or Bari coming down for the day and either draping their beach mats on the sand or renting a sunlounger under an ombrellone. The nearby town of Porto Cesareo has the best selection of hotels, but it’s also worth looking at agriturismi or country hotels just inland – like the very chic Masseria Potenti. 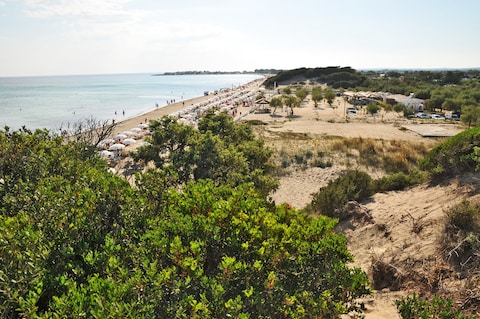 If you’ve seen the Steve Coogan and Rob Brydon divertissement The Trip to Italy, you may remember that one of their competitive Michael Caine-impression sessions was set on the terrace of a restaurant-pensione overlooking an idyllic cove, with a beachside medieval abbey as a backdrop. This magical place is called San Fruttuoso, and it’s in Liguria, around halfway by boat between chi-chi Portofino and the family resort of Camogli. To get there, you either trek across the Portofino promontory, or get a ferry (timetables at golfoparadiso.it). Portofino has its fair share of hotels including Belmond Hotel Splendido, perhaps the most famous in the region, as well as Eight Hotel Portofino and Hotel Piccolo Portofino. Further towards Santa Margherita Ligure, Hotel Argentina offers a more affordable base for exploring the area. As for Da Giovanni – the only place to stay in the cove – don’t expect luxury. The food is good, unrefined trattoria fare – with an obvious seafood slant – and the seven bedrooms are on the spartan side. 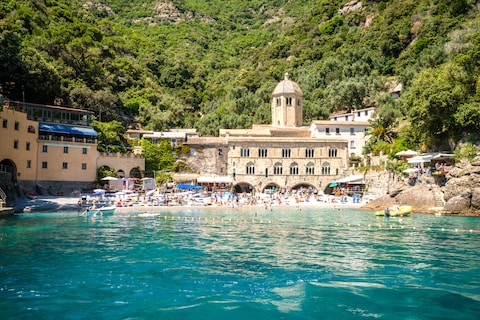 Calabria doesn’t feature anywhere like as prominently as Sicily or Puglia in Italian summer-sun brochures. The barely regulated sprawl that clutters up much of the coast is one reason. But there are honourable exceptions – like Tropea, a classy enclave that is the region’s answer to Positano or Taormina. The old town, full of good trattorias and shops, garlands a rocky outcrop above a gently shelving sandy beach, which is popular with families. Tropea’s evening passeggiata is one of Italy’s busiest and most snail-paced – perhaps because of the sweet distraction of the historic ice-cream emporium Gelati Tonino (Corso Vittorio Emanuele 52) halfway along. The crazier flavours here include onion and cuttlefish; we recommend the lemon granita. Stay at the Hotel Rocca della Sena for access to Tropea beach via a private stairway and a gorgeous terraced garden with whirlpool tubs overlooking the Aeolian Islands. 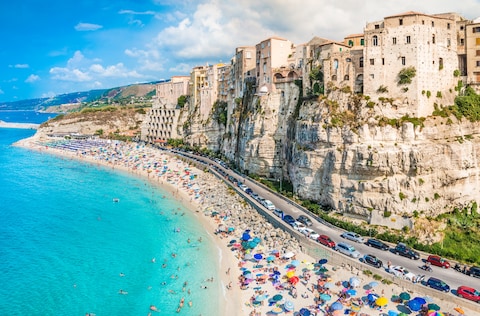 Viareggio is the Italian seaside holiday at its most classic: ordered rows of beach umbrellas, carefully groomed sand, Belle Epoque villas and dapper grand hotels that dream wistfully of their glory days. It’s the kind of place frequented by families who’ve been occupying the same sunloungers in the same lido for three generations, and eat in the same excellent fish restaurants – like reliable Miro alla Lanterna down by the port, or, for a special occasion, elegant Romano. Combining history and style with a Tuscan passion for the good things of life, Viareggio is a little like Florence-by-Sea. Now run by Best Western, the Grand Hotel Royal, the resort’s historic Art Deco luxe option is a landmark in the area with impressive turrets and an elegant design. It has a garden, outdoor swimming pool and easy access to the beach. A summer magnet for families and couples from Palermo and Trapani, this dramatically located resort town not far from Trapani airport is a familiar name for Mediterranean yachties, but otherwise little known in the UK. And long may it stay that way: there are no Taormina-style tourist souks here, just a lively, low-rise garden town panning out along a two-mile sweep of sand dominated, at its northern end, by the vertiginous peak of Monte Monaco. Centuries of Arab influence have left their mark on the local cuisine: couscous, not pasta, is the default carb – there’s even a Cous Cous Fest in September. Regular boat tours head around the promontory to the Zingaro nature reserve and the cute village of Scopello, whose ancient port and tonnara (tuna fishery) have featured in several films – among them Ocean’s Twelve. Timbuktu Hostel in central San Vito lo Capo is just 12 minutes’ walk from the beach and boasts a private terrace with views towards the mountains and the sea. 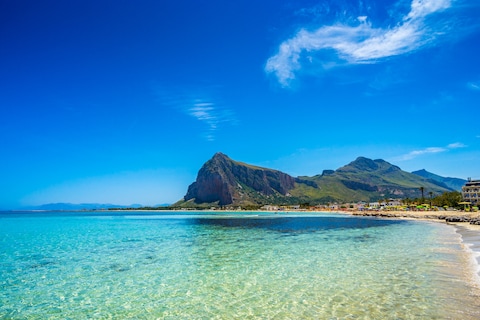 If Monte Argentario is a mecca for elegantly well-heeled summer tourism, the cliff-clinging Hotel Il Pellicano – which celebrated its 50th anniversary in 2015 – is its holy of holies. Redolent of star-studded 1960s glamour, but run with faultless attention to 21st-century detail, Il Pellicano towers above its own private stretch of superbly undisturbed Med. A garden, heady with the scent of lavender and rosemary, conceals just 50 rooms and suites in six secluded villas and in the main house, where a Michelin-star restaurant and a more casual terrace restaurant and bar face on to a swathe of cobalt sea. On levels below the house are a heated saltwater pool and (via a lift) water-side decks for soaking up the sun and plunging into the exquisite water. 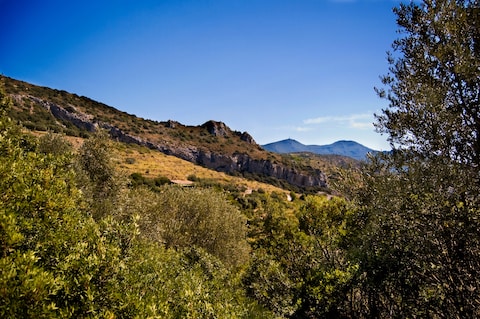 With its interminable white-sand beaches, Italy’s Adriatic coast merits exploration beyond the resorts of Rimini and Riccione. Well on the way towards the “heel” of the peninsula, Vasto – birthplace of Gabriele Rossetti, father of Dante Gabriel and Christina – is an elegant place, set high above a straggle of family-fun beach high-rises to the south, and a striking stretch of unspoilt coastline in the Punta Aderci nature reserve to the north, where trabocchi – ramshackle wooden fishing platforms – emerge like crazy sculptures from the sea. You’ll find exceptional hospitality at the Bagni Vittoria b&b where seven rooms and apartments are a stone’s throw – quite literally – from the Adriatic waves. 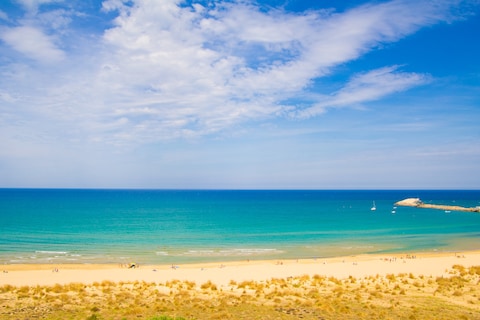 The island of Ischia bubbles and steams with thermal activity, and the spa treatment centre at the magnificent Mezzatorre Resort harnesses this to the full. But the 57-room hotel, perched in a pinewood above its own private cove, also offers exclusive access to a splendid bit of Mediterranean. Located on a terrace along the gentle path down to the sea is a heated saltwater pool. The Mezzatorre’s little bay is rocky, perfect for setting off with a snorkel to explore the local marine life. But the town of Forio d’Ischia, immediately outside the hotel, is edged by long strips of white sand beach. 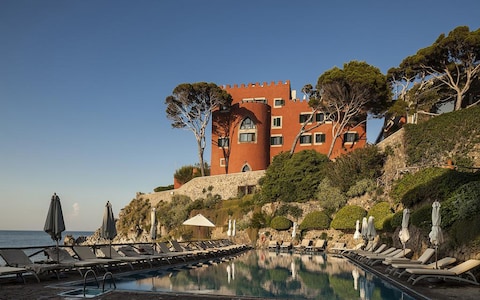 The Mezzatorre’s little bay is rocky, perfect for setting off with a snorkel to explore the local marine life.

On the northern tip of Sardinia, Capo Testa is a bulbous promontory – more like an islet – studded with an array of first-class swimming spots. This is the Gallura region, famous for its wind-hewn granite rockscapes and serrated mountain backdrop, lending the beaches a dramatic air. The fabled and somewhat oversold Costa Smeralda lies a little way down towards Olbia, but the Capo Testa area, with views across to Corsica, has an altogether different feel. The nearby resort of Santa Teresa Gallura has far more energy than the swanky, sanitised Smeralda, and considerably less impact on the wallet. You could be content on Santa Teresa’s own beach of Rena Bianca, but the rocky setting of Capo Testa, 3km west, has more character, with its moon-like rock formations and gold-tinted sand. Most of the beaches are family-friendly and great for snorkeling—be there early to avoid the crowds, or late for the colours and soft light. The best hotels are in Santa Teresa Gallura, including the Hotel La Funtana on the edge of town, with simple rooms, friendly staff and a pool. 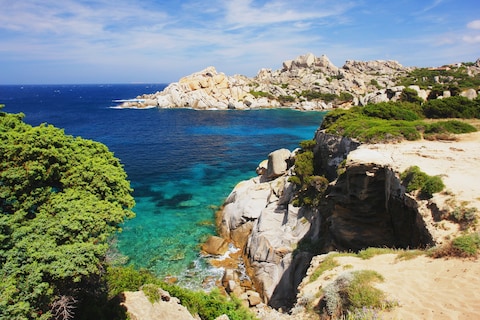 Tracing the coast south-west from Sardinia’s capital is a backward journey through time. From the 21st-century clamour of Cagliari, past a sprawling chemical-industrial complex, you reach the seaside archaeological site of Nora, the impressive remains of a city built by Phoenicians and colonised by Carthaginians and Romans. South of here the human imprint gets a little thin, and at Chia, thick pine forests give way to an enticing succession of lagoon-backed beaches that continue all the way to the southern cape, Capo Spartivento, from where narrow creeks, deserted coves and inspiring mountain views impressive over. Chia’s beaches number among Sardinia’s finest: spacious, with white, powdery sand and marvellously clear water. In season, you’ll find all the necessary facilities, including parasols (absolutely essential on these shadeless expanses), and bars, hotels and b&bs are handily placed. The lagoons – a feature of Sardinia, found on every coast – attract migrating flamingos among other aquatic life. Hotel Laguna is located a few minutes from the beach (with frequent shuttle connections), and has a gym and generous-sized pool and is welcoming of children. 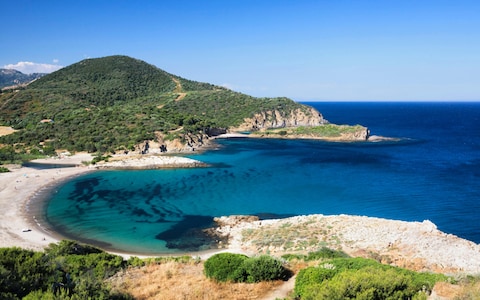 The Arctic in Focus

One o a kind

SEND US
YOUR MESSAGE